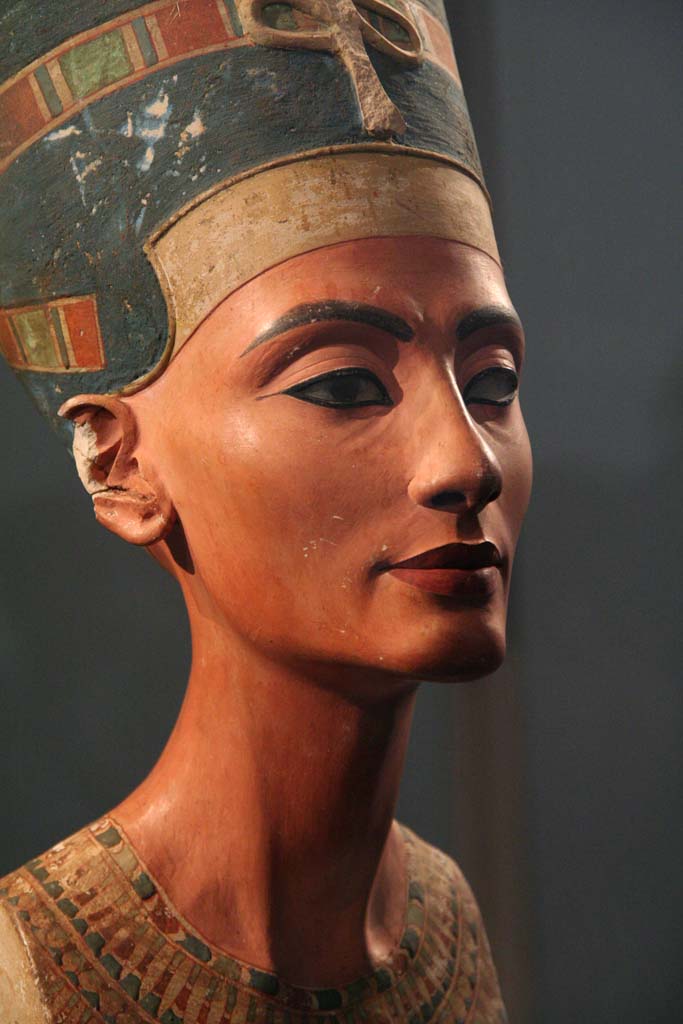 Ancient Egyptian women were the beauty queens of their time. From the opulent green eyeshadows made from malachite to the rouges made from red ochre, many trends that dominate in society today pay homage to the signature looks that were a symbol of beauty, worship and femininity in Ancient Egypt.

But who decided that the eyes should be lined with black, and who said that lips should be stained red? Why not red eyeliner and black lips? Admittedly, that may be a thing for some of us in this day and age, but why have some of the most fundamental concepts of makeup remained so deeply ingrained throughout history? We can all agree that there have been marked developments in almost every field since the Ancient Egyptians. Countless trends have faded in and out within the beauty industry, from the signature pale face and berry lips/cheeks of the 1920 flappers to the frosted lips of the ’90s. Nevertheless, the most basic concepts behind trends have persisted to this day, and I will be exploring the logic behind them in this post.

In general, makeup has always been associated with feminine beauty. Seen as a “girly” thing, marketed to toddlers in the form of dolls and children’s cosmetic kits, and seen as an “alternative” phase when men express any kind of interest in it (though less so today).  But what characterises feminine beauty? What helps us recognise a female face? The answer is high contrast. Female faces typically have higher contrast features compared to male faces. Think large eyes, voluminous lashes, a bee-stung pout, a slim nose and high cheekbones. Biology predisposes us to subconsciously perceiving women with higher contrast features as more feminine, and therefore more attractive females. The role of makeup simply acts to enhance the contrast, or create more contrast. This is why contouring products exist, and red lipstick is such a hit in the world of pornography.

The eyes are the windows of the soul. A commonly known saying, often seen in various essays, film scripts and Tinder chat-up lines across the globe. The eyes are often the first thing you notice about someone. They are so involved in almost every facial expression we know of – they crinkle when someone laughs or smiles, grow steely and dark in anger and widen in surprise.  Going back to the high contrast idea, large dark eyes framed by long, dark lashes are a classically feminine trait. This is why eyeliner and mascara exist. They darken the eye outline and enlarge the eye, which makes the surrounding skin pale in contrast.

Interestingly, the cat eye look works in a similar way. It was inspired by, well… kitties. The eyeliner is applied in a way that elongates the eye, mimicking the shape of the feline eye and perhaps in retrospect, the almond-shaped silhouette perfected by Ancient Egyptian women. Cats are known for their light eyes, and various studies have shown that women with lighter eyes can be seen as more feminine, particularly when the eye outline is framed by dark lashes. In reference to the photo of Cara Delevingne above, the black wing applied to the outer edges of her eyes really makes her blue eyes pop, enhancing their colour and shape.

If the eyes are the windows to the soul, the lips must be… the door? Undoubtedly they play a very active role in communication, and a mere pursing of the lips can mean anything from annoyance to the desire to kiss someone. The red lip has been a beauty statement throughout history, from the age of Queen Elizabeth I of England to the iconic Marilyn Monroe. What is so significant about the colour red? Going back to biological roots, red is the colour of blood. In a state of arousal or physical exertion, the blood vessels dilate and blood rushes to the skin, making it appear more flushed, hence rosy cheeks when you exercise (or in my case, tomato face). Red lipstick and blush mimic this – portraying the image of a woman in arousal (who doesn’t like a bit of passion every now and then?) On a more PG note, they give the wearer a healthy glow, which automatically makes them more attractive and a better choice of mate from an evolutionary point of view.

So wear that cat eye and red lippie with confidence. Embrace the contouring trend with open arms (and purse). Every product you put on your face comes from a long history of cultural and psychological influences that are just as unique as you are. Be the strong, sassy woman every girl dreams of becoming and every man dreams of having. As Elizabeth Taylor famously said, “Pour yourself a drink, put on some lipstick and pull yourself together.”

What I’ve Learned About My Blog Readers

View all posts by J | thenellybean →

23 Comments on “The Logic Behind Beauty Concepts”